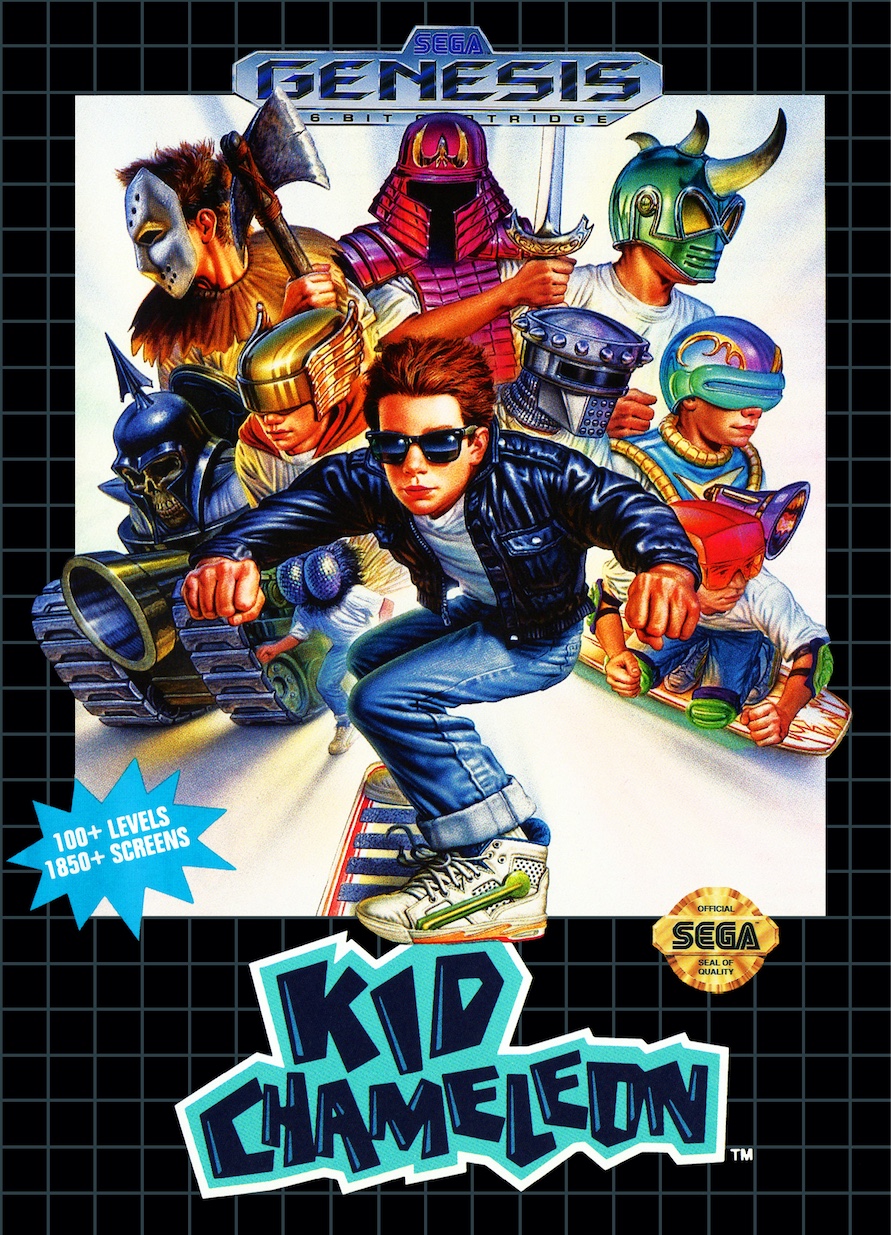 Kid Chameleon is one of those games that I didn’t even know existed growing up. When my bro was living in USA, he stumbled upon a retro game store that had it for sale for 10 bucks. I asked him to grab it for me. Deep down I was hoping this was one of those hidden gems that I had never heard of and was super fun to play. The cool dude on the front of the game made be believe…but the belief was misplaced! This game is playable – but extremely forgettable.

In terms of story – there is very little apart from the opening seen (see below). Basically, there is a virtual reality arcade machine that allows people to walk into it to play it – kind of like the holo deck in Star Trek. Many kids have been playing it, but the game has been beating the players and keeping them hostage! Its your job as Kid Chameleon to play the game and beat the bosses and rescue the kids that don’t know how to play video games!

This game is a 2D platformer plain and simple. You take control of Kid Chameleon and can run and jump like any other 2D platform game.  The problem is the slippery controls! Running around feels like you are constantly on ice. Jumping is weird too – there are quite a few technical jumps that must be made in the game, but to make them, the player must run and then jump to get height or distance. This would be fine if players felt in control while jumping, but that’s just not the case.

Apart from that, the game does have some interesting mechanics. The kid is called Kid Chameleon for a reason – he can pickup up different power ups that give him powers. For instance, he can pick up armor that gives him more hit points and the ability to climb, a sword so that he can attack like a Samaria, and a horn that allows him to bulldoze through walls! I really liked this mechanic as it made the levels more interesting to explore somewhat like a simplictic metroid game.

There are a large amount of levels – I have not completed the game but must have got through at least 20 levels before I had a game over. Most of them are simple runners where you need to get to the flag to complete the level. Occasionally there are teleporters or other secrets to find extra lives or gems, which makes the levels somewhat more fun to explore, but the rewards themselves don’t really feel all that rewarding. I found most of the levels felt very similar despite the changes in environments and enemies. There were exceptions though – one level had the screen forcefully scroll to the right which forced the player to run through the level quickly. I really liked this level and made the game quite engaging.

In terms of graphics, the game looks fairly bland. There are lots of environments from forest areas, to caves, to cityscapes, to beaches, but they all feel a bit boring. The main character is also really small on the screen, although some of the different forms he can take are quite funny. My favorite is when he turns into what looks like Jason from Friday the 13th! There are plenty of enemies, but they all look generic and boring. The music is okay. It sets the tone of the game and gets the job done. The sound effects similarity are present but aren’t exceptional.

Overall, this is a playable 2D platforming game with poor controls, that had potential (especially with different power ups) but just didn’t quite live up to what it could have been. The game has moments of being fun, but it not an overall great game. I give this game a final score of 5/10.