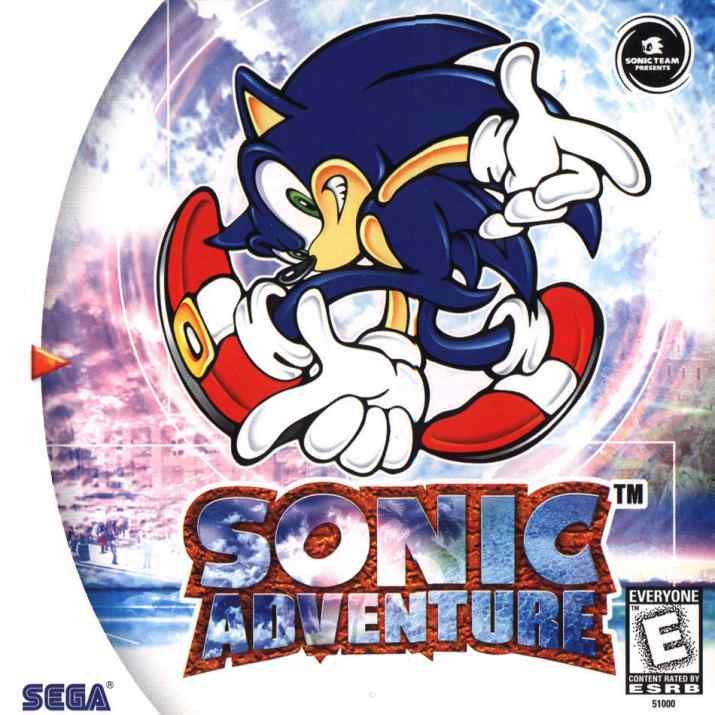 The jump to 3D was challenging for many franchises – but when I finally got my Dreamcast in high school, I loved how fast and awesome Sonic felt in Sonic Adventure! With Sonic Forces and Sonic Mania approaching for Switch (and other consoles) I thought it would be fun to revisit this old favourite. Boy has my opinion changed! This is not the Sonic I remember!

The story of this game is a complete mess! It has all the ingredients of a Sonic story like Eggman, Sonic, Tales, Knuckles, and Chaos Emeralds – but apart from that, its extremely strange and disorganized! The game takes place in what seems to be a modern city with regular people, and Eggman is trying to collect the Chaos Emeralds to feed it to a monster to make it become more powerful! The story unfolds over six different playable characters that together fill in some of the blanks, but it is still quite disappointing!

In terms of gameplay – the game is quite complex because there are so many playable characters with different gameplay styles – but overall the game is a 3D platformer. Players take control of Sonic and guide him though 3D levels in a forward momentum to help capture the speed of his prior 2D adventures. One button jumps and zooms into enemies for an air attack, while the other charges Sonic up for speed boosts. The controls of Sonic aren’t bad – the issues come when taking these controls and placing Sonic in levels that don’t fit his abilities!

The first couple action stages are awesome. Sonic has the room to run and jump and it feels like you are REALLY Sonic. Most of the later levels are where the game really suffers for Sonic – they are too narrow, too many enemies, too many puzzles, and not enough speed. The game also introduces a lot of platforming later-on, but the controls of jumping onto specific platforms just isn’t that great. The camera in this game is also absolutely HORRIBLE in smaller areas. I would say 75% of the Sonic levels are not fun to play, which is really disappointing. For the two awesome levels see pics below for Emerald Coast and Windy Valley.

There are  tons of other characters too to play, some of which feel like last minute additions. Firstly Tails and Knuckles are here. Tails basically has levels similar to Sonic but he needs to beat Sonic in the race to move forward. He has his flying ability which is fun and helps him feel unique. He also gets a couple flying mini-game levels where he needs to fly his airplane which are like basic Star Fox levels. Knuckles can glide through the air and punch enemies – cool abilities but I am not a huge fan of his level types. Knuckles needs to collect broken gems throughout levels in open environments – guided only by a blinking emerald icon when he is close. These levels felt unnecessary and while they changed up the gameplay and allowed more exploration, really felt like they were included to artificially extend the gameplay of the game.

Amy Rose, Big the Cat, and E-102 Gamma are the oddball characters and I didn’t feel like they needed to be playable. Amy’s levels felt like slow beatem’up levels, Big the Cat just basically fishes (as in a fishing mini-game), and E-102 Gamma played like a shootem’up where you lock on to targets and let loose. E-102’s levels were fun, but didn’t have any business being in a Sonic games because they were slow and a bit combersome. I really felt like if the developers wanted this to be a Sonic game, they should have focused more on what makes Sonic games fun – which is speed and tight controls!

In terms of overall game design and story progression, the game is set up as a mix between open exploration areas, action stages, and bosses. The exploration areas are somewhat like the castle in Mario 64 – but this time take place in a cityscape and the mystic ruins. These areas work for what they are – a hub world to connect all the action stages. It’s the action stages where the game really falters because most of them just aren’t that fun!

The game also has a number of bosses as well. Players get to battle Eggman a couple of times, and these battles are actually quite fun! He appears in different forms (just like the genesis games) and apart from the couple fun action levels, these battles might be the highlight of the game for me. You also get to fight Chaos a number of times, but these battles were not nearly as exciting. There are also a couple times where you must fight your allies like Sonic vs. Knuckles – these battles were a waste of time because they are way to easy and generally take less than a minute to compete.

In terms of graphics – they are mixed with a leaning towards good. Many of the environments looks fantastic (especially the first couple of action stages that take place outside). Lots of colours are used that really make it feel like the genesis game reborn in 3D! The characters models also look okay – except when they open their mouths (see the top image with Sonic and Tails for an example). Playing the Gamecube version I also did notice a bit of frame rate issues when playing in progressive scan mode, but it never really effected gameplay.

The music in this game is over the top with lots of singing! Some of the tunes work well in a good-cheesy kind of way while others kind of fall flat. The sound effects are decent, but what really ruins the sound for me is the voice acting – its simply atrocious. Not only is the dialogue bad, but when Sonic and friends speak, it makes me want to go back to the 16-bit era. I would have much preferred the Japanese voices with subtitles.

In summary, I had nostalgic memories of this game that were dashed by the experience I just had completing the game. There are a couple really awesome levels that feel great with Sonic, and then the rest feels messy and disorganized with horrendous camera and voice-acting issues. The developers were trying to do too much with the game when they should have focused on what makes a Sonic game fun – which is speed and tight controls! The many characters do add variety, but they feel like underdeveloped afterthoughts. Overall, I give this game a final score of 6/10 which is probably more than this game deserves! Here is hoping to an awesome Sonic Forces in the coming months!