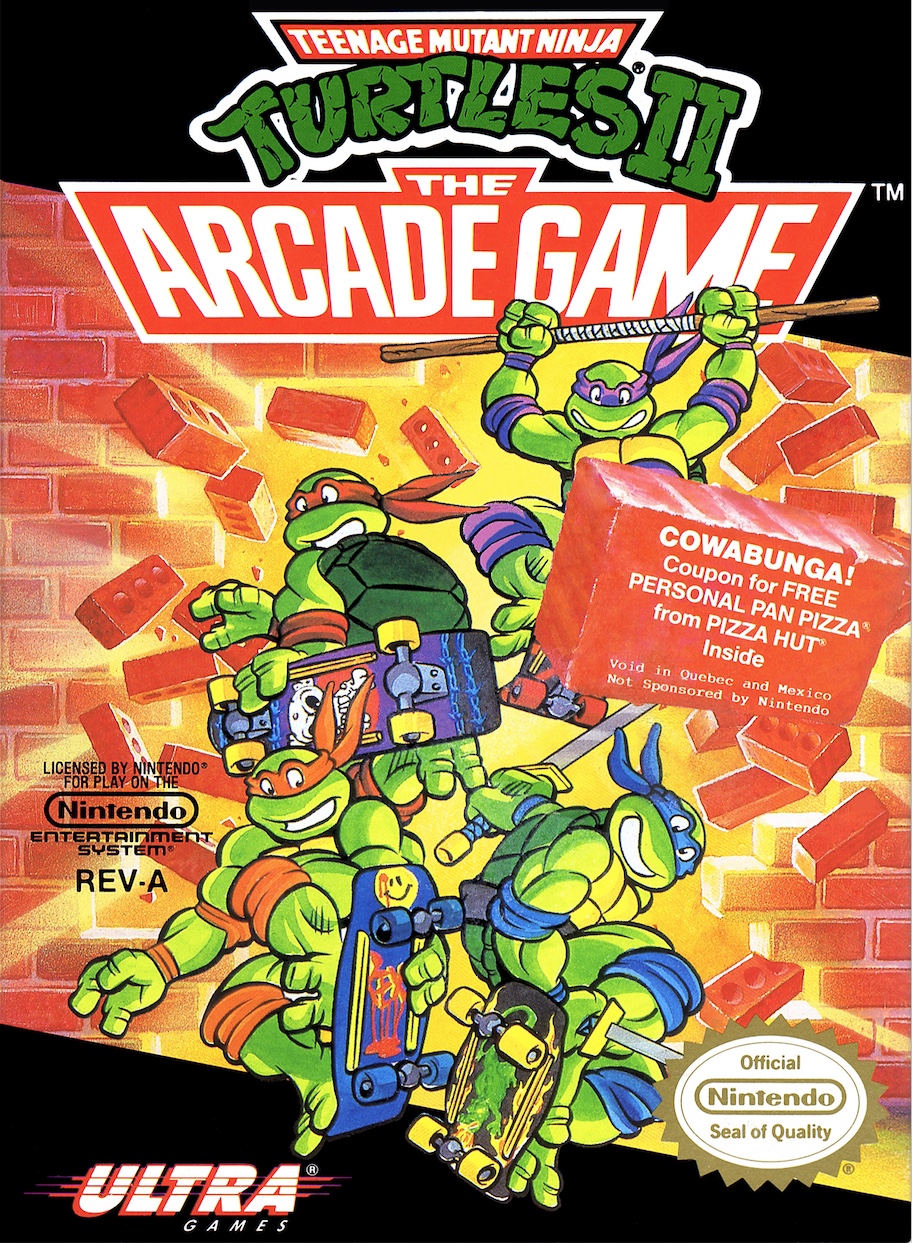 Ninja Turtles was a staple of my childhood. My brother and I would do flips over the couch in order to prep for an episode of the TV show. When the games for NES game out, I was ecstatic. I first played the original – which was fine enough but it didn’t capture the intensity or team-work aspect of the TV show. Enter this gem! I thought I would give it a review!

In terms of story, it is about as stereotypical as it gets for ninja turtles, but it gets the job done well enough! April has been captured by Shredder and the ninja turtles need to rescue her!

In terms of gameplay, this is a beat’em up. You take control of one of the turtles and run though stages bashing and jump kicking enemies. You can push A and B together to do a strong power move, but you must use it wisely as it takes a bit of your health! The controls are tight but the turtles don’t really have a lot of moves to do, so the game can feel a bit stale as time goes on. What makes this game a true representation of the TV show however is that you can finally play it with a friend! My brother and I recently ran through the majority of the game and had a blast playing it – it was much more fun playing cooperative!

The levels are all very linear but each introduces a couple of interesting mechanics like rolling bowling balls to dodge or sewers to fall into to keep the game from getting monotonous. Each level ends with a boss fight – and these bosses are generally from the TV show like Bebop and Rocksteady. I found these bosses quite challenging, but if you get into the correct rhythm and attack them over and over, you can often avoid most damage. As you damage them, they tend to speed up their attacks and become more dangerous, making them all the more challenging.

In terms of graphics, the game still looks good for an NES game. The sprites are colourful and detailed enough and you are able to differentiate between each of the turtles. One thing I noticed was the significant amount of flickering on-screen when there were multiple enemies being engaged. While this is quite apparent in the still images, during gameplay it isn’t as much a problem. The levels also have great variety ranging from burning buildings, streets, sewers, and even a frozen city! The music also has all the classic ninja turtle music, which makes the game extremely nostalgic and enjoyable!

In summary, Teenage Mutant Ninja Turtles II: The Arcade Game is an good beat’em up for the NES that while a bit monotonous alone, is still a lot of fun to play with a friend. The game is challenging but if you keep at it and learn the bosses, it can become easier! Overall, I give this game a 7/10! It’s a fairly inexpensive game, so give it a try!