Dragon Quest! One of my favourite JRPG series in the world! I really only discovered the awesomeness of this series over the past few years apart from the first game which I played as a kid. For this review, I played both the Super Nintendo version (on a translated reproduction cart because we never got it in North America), and then played the DS version all the way through. Most of the pictures are captured from the Super Nintendo version as the quality is better, although I have thrown in a few shots from the DS game for comparison.

Dragon Quest 6: Realms of Revelation, similar to the games following the first trilogy, is a standalone game. It tells a story about a guy who falls into another dimension! The game starts off with our Hero hanging out in the woods surrounded by his comrades, waiting for the morning to attack Murdaw, the demon king. Soon after the encounter, our Hero and his friends are dispatched with ease by Murdaw…and suddenly…our Hero wakes up in his bed in a quite village in the mountains – it was all a dream! Or was it? 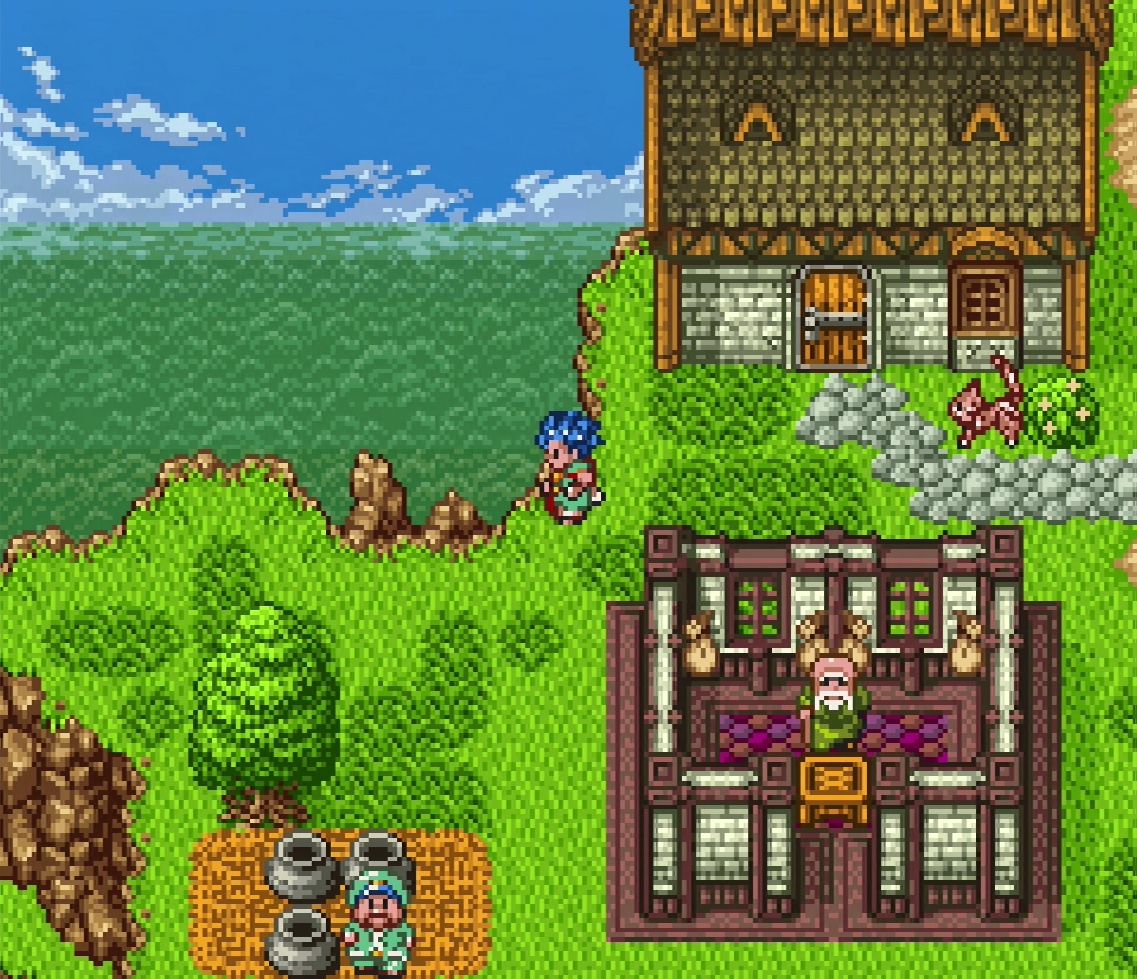 I actually really enjoyed the story in this one – it is not as emotional or thrilling as part 5, but it has such a unique story employing ideas like ‘real’ and ‘dream’ worlds and the splitting and merging of characters. I really felt driven to uncover the secrets of why people mistook the Hero for a prince when I thought he was from a small village in the mountains! There are some more emotionally charged moments too but they are less prominent in the this episode.

In terms of the gameplay, this is your classic JRPG. You start off extremely weak but over time (and many random battles) you gain strength and become powerful! Speaking of the battle system first, there is nothing revolutionary here – it is menu driven and straight forward. As there are so many random battles though, I was pleasantly surprised that there is a tactics option that really helps power through battles quick so that I could continue on my journey.

Initially I was also a tad disappointed that my party members all seemed fairly similar in terms of their abilities during combat – they have a few distinct moves but nothing that really made them feel different. About 20 hours into the game though, the class system unlocks which really broadens the array of abilities that are available. By then end of the game, the tactic option is a must because you accumulate so many attacks that it takes forever to select abilities quickly. I only really took the tactics option off during boss encounters and when I was low on magic.

In terms of bosses, they are hard! Few games these days can get me to the game over screen – but this game did numerous times – and I am happy for it! I really needed to use every ability that I had to survive which made this game (and battle system really enjoyable)! There are tons of normal enemies too, and while some are recoloured during the later game (as harder versions of the creature), it did not bother me a bit. Overall, I really enjoyed the battle system!

Other aspect of gameplay focus on character progression. This is primarily done through levelling the character with experience, but also though getting new and more powerful items! When getting into a new  town the first thing I would do is go to the weapon and armour shop – and while new equipment was always expensive (and I could never afford everything on my first arrival) I liked having to strategically choose what I needed now and what could be obtained later. In the later parts of the game, there are tons of side quests too to get powerful items which I also really enjoyed! In terms of party progression, you slowly acquire your team members over the long journey, and even get a few slimes to join you later one! I really liked the variety of the characters and each felt fairly fleshed out!

One aspect of the gameplay that I did not like is the emphasis on menus for everything – and some of them are really clunky (especially in the Super Nintendo version). Moving items from one person to the other is a real task – I wish all the items picked up could automatically go to the bag so that you spend less unequipping them. This is somewhat improved in the DS version, but the menus still feel clunky! Another aspect I did not like is the nee to go to church to save! I understand this is a long running part of the game, but it now feels quite dated since many recent RPGs let you save just about anywhere. It was never a huge problem although I did loose some progress a few times when I died while grinding some levels which was a bit annoying.

In terms of graphics, I love the pixelated look of the game – it is a dramatic improvement over part 5 on the Super Nintendo. There are lots of cool effects employed during battles too! The DS version has  a definite leg up in the graphics department and some of the maps can be rotated in 3D (which is kinda cool), and the 2nd screen is employed for a much larger view of the game world. On the over-world map, the second screen is also used as a map which helps navigate the world! The music is also good here – it has the iconic dragon quest music as the start – but the music is probably the weakest part of the game. It is never boring but just does not have the memorable tracks that are found in some of episodes of this series. 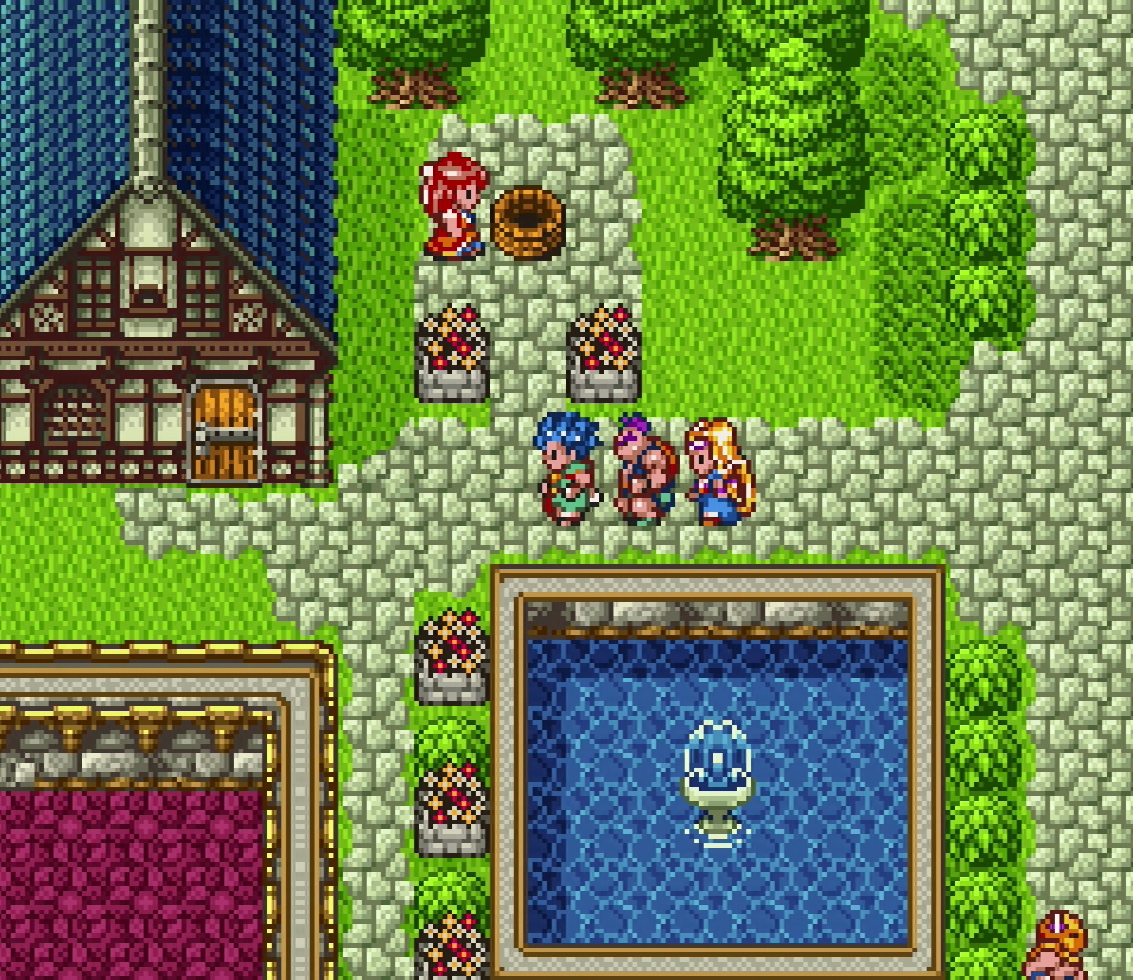 Overall, I enjoyed this journey! It is a long adventure with cool characters, unique story ideas, and a cool battle system that is made more interesting with the addition of the class system. There is still some clunky menu and saving mechanics, but it does not ruin the experience! If you have not been won over by JRPGs up to this point, this game will not win you over, but if JRPGs are your thing, you are in for a grand adventure! Overall I give this game an 8/10.