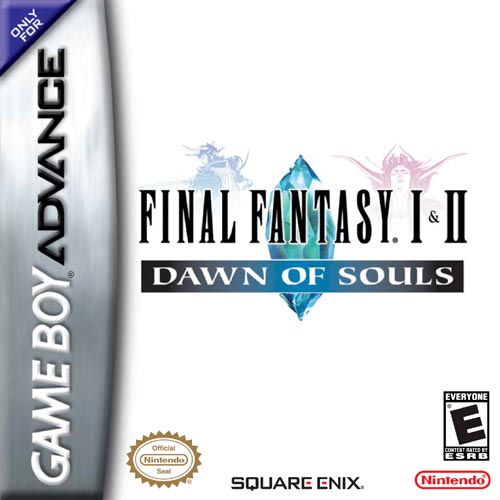 Final Fantasy is a series that has been in my life for years.  The first one I beat was Final Fantasy 7, and I loved it. It really introduced me to how awesome and epic a video game could be. Growing up I had briefly played the original but never played it start to finish – so I thought because it had such an influence in gaming, that I found finally give it a full review! In this review, I primarily played the GBA version of Final Fantasy 1, but also played some of the NES version which I will discuss later in the review!

In terms of the story, this seems cliche – but it really is where the cliches’ started! You start the game as four hero’s of light, who have been prophesized  to save the world in the dark times! I won’t spoil it, but the story involves the four crystals, different races like the elves and dwarves, and even time travel! While a simply story, there are a couple littles twists that I found entertaining! While the main characters themselves are quite one-dimensional (with not character development) and are always referred to as a group, I really enjoyed the difference races and the use of time travel later in the game! It is a simply and enjoyable story that helps bind the rest of the game together.

In terms of gameplay, games do not get more JRPG that this. You star the game as the four heroes of light and you get to select which class each member will be! There is the warrior, thief, white mage, black mage, black belt, and red mage! Each one has their obvious strengths and weaknesses. I found the warrior really overpowered at the start of the game, usually dealing most of the damage and taking very little, but as huge numbers of enemies were encountered during battles, it became obvious that black mages were necessary to wipe them out with one spell – it would take forever otherwise. Later in the game, you are able to upgrade the classes to gain access to more spells or equipment, but there is not multi classing real depth besides ensuring you have a balanced team.

And with you balanced team, you will be doing TONS of battles. Like most Final Fantasy games, you have random encounters with enemies as you walk along the world map and in dungeons. What was unexpected was the high frequency of battles. You can have another encounter after ONE step on the world map. At the start of the game I did not mind the grind, but later on it became somewhat tedious. On the plus side, the battles were usually very quick and could be won within a turn. On the negative side, I wish I could have had an option to have my characters defend as I would regularly just want my mage to smite everyone, but all the other classes would go first and prolong the battle.

While not true of the GBA remake, on the NES version, if one of your party members destroys an enemy and another party member is targeting the enemy for a future attack, the party member will not change target and will actually waste an attack on an already defeated enemy. I found this annoying but somewhat expected as it was one of the first JRPGs. Luckily not an issue with the remake!

In terms of the flow of the game: you battle, you find a new town, you buy new gear and spells, you battle, you fight a boss, you get a story sequence which moves the plot further ahead, and you repeat. All the battle grinding will come in handy too because spells and equipment are expensive! The world itself is quite large with three continents and some islands, and as the game progresses you gain access to cooler vehicles likes boats and airships to further explore! There are some minor side quests as well which encourage returning to previous areas which I sort of enjoyed as well!

In terms of graphics, the game looks great (both on GBA and NES) – although obviously much better on the GBA. The world is colourful and the spell effects are great to look at. The music in this game is on another level – it is amazing! I regularly would return to a temple or town just to listen to the music. The original final fantasy soundtrack is the first video game soundtrack I bought growing up and it is still amazing today! Listen to the music in the gameplay movie at the bottom of the review!

In terms of differences between the NES and GBA versions (besides what I mentioned above), the NES version has a slightly different magic system where you get a total number of spells to cast before you must rest (think Baldur’s Gate on PC). I found this somewhat more strategic because you could not just spam Fira over and over to plow though enemies, but similarly by the end of the game I just wanted to be done with battles so I appreciated the ability to spam spells with MP in the GBA version. The GBA version also has a few extra benefits like a cool Bestiary which includes all the monsters you have defeated throughout the game. It also includes Final Fantasy II (which I did not review) which is a definite bonus!

Overall, Final Fantasy still holds up well today – especially its amazing soundtrack – but if you want to play the most enjoyable version, please choose the GBA version as the tweaks to the magic system and battle mechanics make it much more enjoyable and smooth. This game is historically important and is still fun if you like JRPGs, but for those who do not enjoy grinding and random battles, please look elsewhere. Overall I give the GBA version an 8/10 and the NES version a 7/10. Both versions are fun, but the GBA version is just so much more playable today.