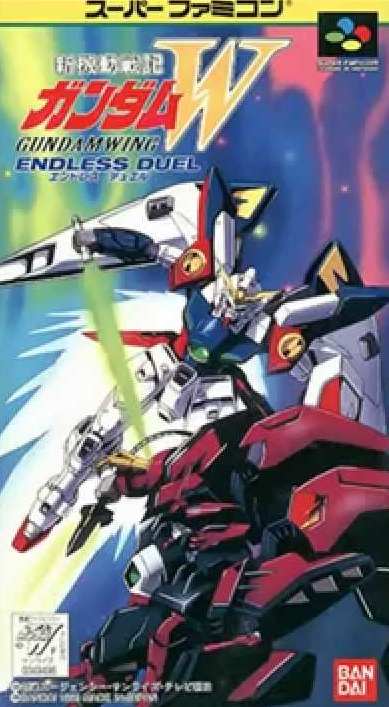 Gundam Wing was the first Anime that I watched that was not kid-focused like Dragon Ball Z or Pokemon. When I saw it on TV, I was blown away by how amazing the robots were, how cool the art was, and how it blended war drama with awesome space combat. How cool would it be to play a game where these giants robots could battle each other?! Little did I know that in Japan, a Super Famicon game was released that allowed this very thing! Recently, I ordered a reproduction cart of this game, and I am excited to talk about it today! It was much better than I was expecting!

The game does a poor job of explaining what the actual story is – mainly because it is in Japanese (which is a language  that I do not speak), but it doesn’t really matter because giant awesome looking mechs are fighting each other all over the place. This is a fighting game built around the design of  Street Fighter 2. Players select their own giant robot to do battle with against one another.

There are a total of 10 robots to do battle with, with each one having unique button combinations to do special moves. In addition, they also have different stats like speed, defence, power, and weapon strength. I played many of the characters and they all felt quite different with lots of cool moves for each.

In terms of controls, each mech has a strong and weak punch, and a strong and weak weapon attack. Each mech also has 300 power below their life bar that shows how much backup energy for attacks they have. Power attacks take between 100 and 200 power, and shooting a machine-gun like attack takes it down one at a time. Without this power, you cannot do all the cool fancy destructive moves. It gained be regained though! If you block, or use regular attacks, it will refill and you can unleash some new devastating attacks.

There is one last cool feature – you can jet around in your mech! While mechs are somewhat sluggish, if you hit two buttons at once  (I think strong punch and strong weapon) plus a direction, you can jet in any direction. What’s even cooler is that do a second jet at the end of your first, so you can jet up, then towards your enemy and do a drop kick on his head all in one attack. This ability really made me feel like I was fighting in a mech!

While there is the traditional arcade mode where you battle against the computer against all ten mechs, the main fun of this game really is the awesome multiplayer. There are not special options, but it is just a blast bashing each other into the ground!

In terms of graphics, this is one of the most beautiful 2D games that I have ever seen. The animations are smooth and there is little to no slowdown! I don’t know how they did it, but they did! The special attacks and beam swords all look great to, and the set pieces for each level really help to see the scale for how large these machines actually are!

In terms of music, this game also dominates. I can’t count how many times I looped the intro song when writing this review. Most if of not all of the songs help produce a scifi war atmosphere that suits this style of game. The sound effects also make it even more satisfying to pummel your friends into the ground.

Next to Street Fighter Alpha 2, this is my favourite fighting game on the SNES. It’s beautiful, fun, and have giant mechs that battle each other! With a bunch of pals over, this game is endlessly replayable. While the game was never released stateside, there are numerous game sites they produce reproductions of the game. Overall, I give this game a 9/10. It is just too good to past up!