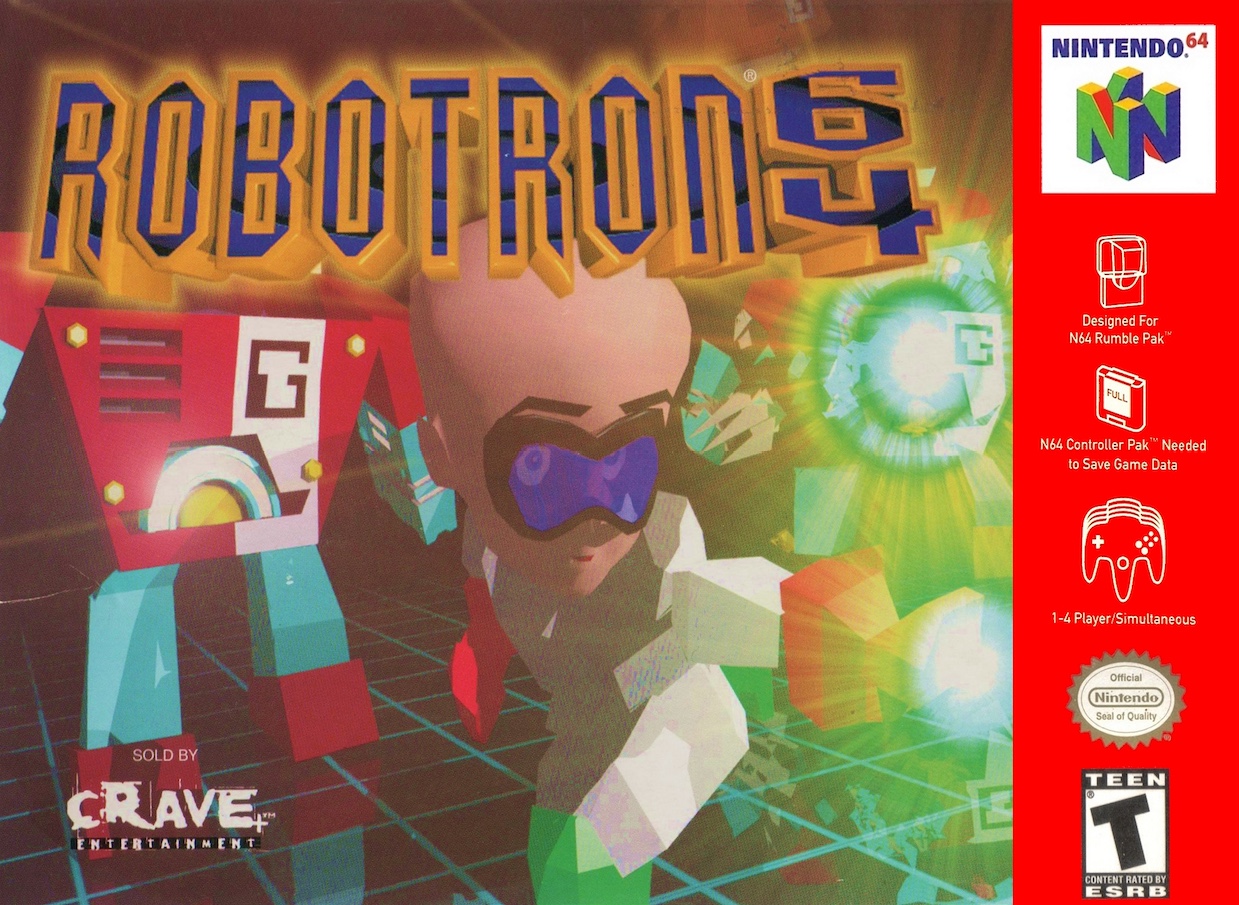 Few games from the arcade era of the early 80’s made the leap into 3D. Robotron 2084 is one of the few that made the jump! Today I’m going to revisit the 3D remake for the Nintendo 64. Robotron 64 is a simple game that captures the essence of the original (maybe to a fault) but that is simple but is nevertheless a fun callback to the arcade.

In terms of story – I am not sure of the details, but the game takes place in the future abd robots have overtaken the world. You have some powers to shoot lasers, so your job is to fight back and save the humans!

This game is about as simple as you can get – a top-down 2D shooter. Blow up the robots and save the humans!  The control stick moves your character around the levels so that you can collect the humans and dodge the robots, while the C buttons shoot your laser attacks in the four directions so you can dispatch the evil robots.

The more humans you collect the more score (and thus lives) you have to get through he game. Occasionally you can find temporary power-ups in levels that give you more powerful blasters but they are few and far between and don’t actually help that much. While the game is fun, I was disappointed with the lack of power ups (there aren’t even bombs) and the lack of sense of progression – the game just got harder but I didn’t get any more powerful.

The variety of enemies are good and many of them have distinct attack patterns that keep things interesting but they basically all die the same way – shoot them! There also seems to be an endless amount of levels – I got to at least level 50 and it didn’t seem like I was getting close to the end. After a while though I got a bit board and needed to take a break.

In terms of graphics – the game looks very basic with enemies being constructed from few crude polygons. But what is impressive is how many enemies the developers squeezed onto the screen, and with only a bit of slowdown to boot! Every 10 levels the background changes a bit, which adds some variety but doesn’t really add a whole lot.

The music on the other hand has a really cool electronic-techno sound which fits exceptionally well with the games setting. The sound effects are fine but aren’t exceptional.

In the end, this is a simple arcade game that while repetitive, is fun for short bursts of time. I give this game a final score of 7/10.  It’s worth the pickup especially with how inexpensive the game is these days.