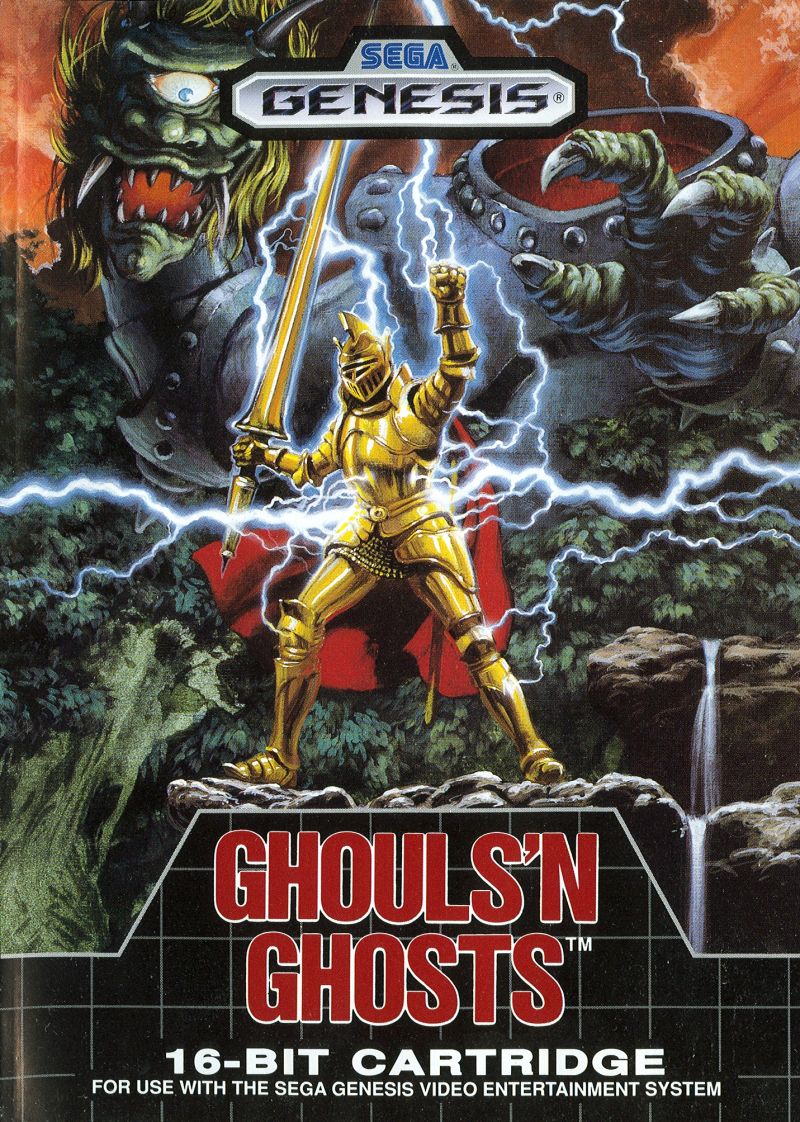 When I got back into retro games a couple years ago, I was a big fan of Super Ghouls and Ghosts – it was an amazing puzzle platformer that looked fantastic on the SNES. What I didn’t realize is that the series comes from the arcades, and that there existed another 16-bit game on the Genesis that wasn’t identical to the SNES version. I was not familiar with it, but a good friend of mine Kris played the game religiously as a kid and use to beat it in a sitting! This week I take a look at the Genesis version of Ghouls and Ghosts for the Genesism and with Kris’s help, was able to see what some of the later levels looked like!

In terms of story, you play as Arthur – a knight who is tasked with destroying the evil monster Loki and his horde of undead monsters! Doing so will revive all those lost to Loki’s minions including his beloved Princess Prin Prin. The story never gets more complicated than that!

The gameplay is similar to Super Ghouls and Ghosts – but it feels simpler. This is a 2D platform puzzle game. You move Arthur with the D-pad and jump and throw his weapons with the other buttons.  There are six levels that must be completed, each with a boss of sorts at the end! You start with a lance, but can find a couple other weapons scattered throughout the levels like a dagger, torch, and axe. Arthur starts out with a set of armor, but can quickly loose it by getting hit. On occasion he can find extra armor that can make him more powerful! This armour powers up whatever weapon he currently has equipped and makes the game much easier to progress through. But again, once you get hit, the armour disappears!

The puzzle aspect of the game is focused on how and when to jump, and what weapons to have and when to attack. When I initially played the game I played it like Mega Man and did horribly. This is not a fast action game – you need to take your time and be methodological. The longer you play the game, the better you will know it and the more fun you will have. One thing I leaner the hard way though is that you need to beat the game twice to really get the true ending.

Each level has a boss and sometimes a mini-boss. I was quite impressed with these fights because they are quite challenging (at least initially) until you figure out which weapons should be used on each boss. The most annoying aspect of the game was accidentally loosing your weapon by touching another by accident and then not being able to get your old weapon back – as some bosses  are so hard without the appropriate weapons. The bosses themselves are quite unique from one another with some being gigantic demons so others being huge sea monsters or fire hounds.

In terms of graphics, the game does look like an early Genesis game but it still has a nice charm to them. The sprites are quite detailed and colourful and the bosses are huge. I was just a bit disappointed with how much black there was in the backgrounds of many of the levels which really made them feel flat. The music is classically Ghouls and Ghosts – if you ever played this game (or others in the series) the music will  quickly come back to you. Its nothing fancy but captures horror-like theme of the game.

In summar, this is a basic but fun and challenging puzzles platformer. There are a couple annoying things in the game (like loosing weapons you like by accident) but it still holds up reasonably well today. If you like old school hard video games, pick this one up. I give this game a final score of 7/10.