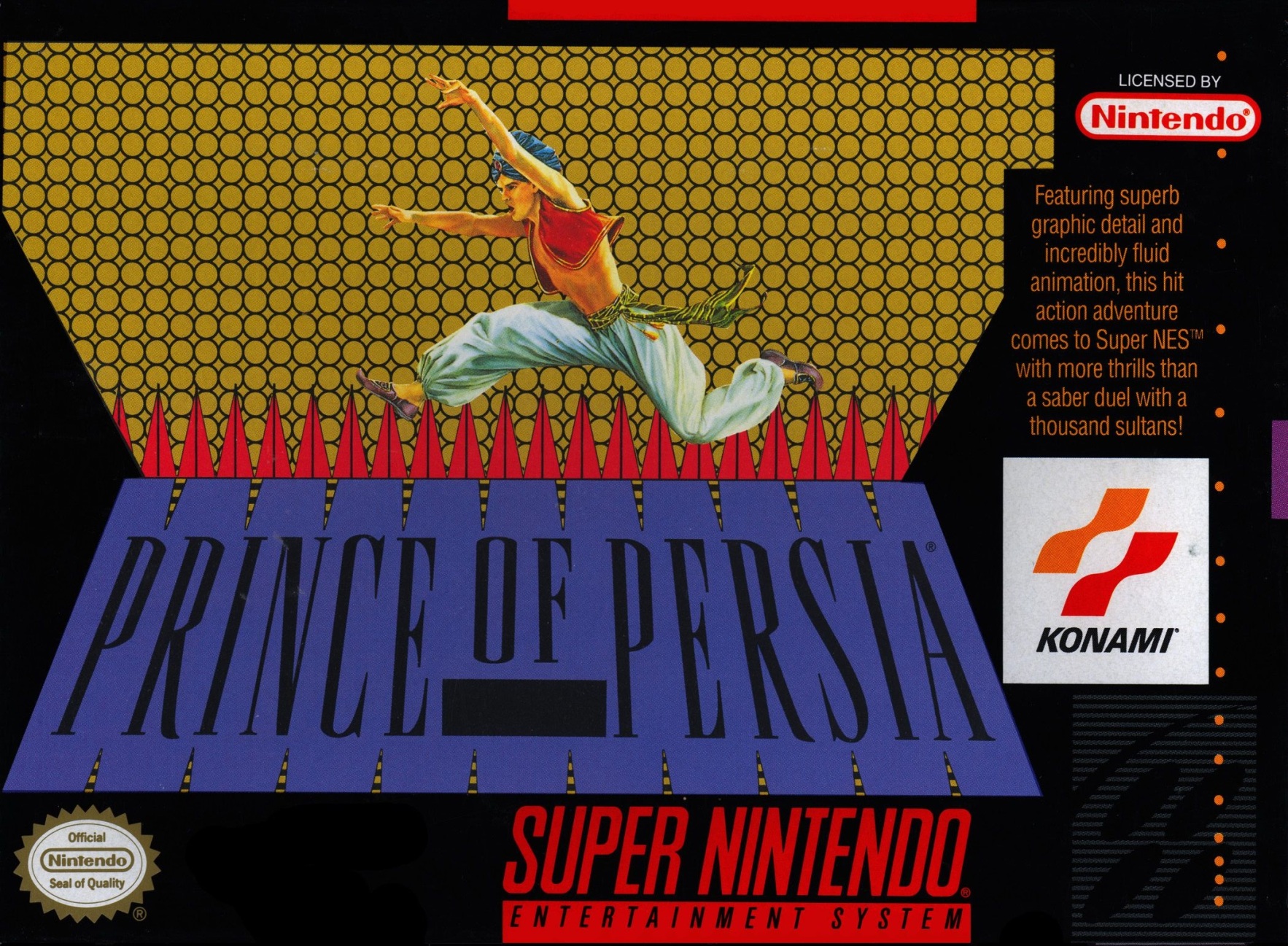 The first time I played Prince of Persia was on an old PC in the early 90’s. It was tough as nails and I don’t think I ever even beat the first level. Recently I picked up Prince of Persia for Super Nintendo, and heard that it was pretty good and a nice upgrade from the original PC game. The game is still tough as nails, and it has a high learning curve, but if you stick with it, it’s actually quite fun and rewarding.

In terms of gameplay, this is a 2D platform puzzler. You guide the prince through 20 dungeons of jumping over spikes, fighting guards, and repeatedly dying! You can make the prince run with the direction pad, with the other buttons causing the prince to walk, jump, and duck. In the first dungeon, the Prince also gains access to a sword, which allows him to battle guards. While fighting is a nice departure from exploration,  I did not like how they handled it. Fights take too long and just don’t seem fun to me.

The button scheme was initially very difficult to grasp and I repeatedly and unintentionally fell to my death. The controls reminded me of games like Flashback and Out of This World. As time went on though, I got use to the controls and the game became rewarding and fun as  I started landing jumps and finishing dungeons. Key lesson – when you walk, you can position yourself safely on an edge to jump and will not fall off! I died too many times by accidentally falling off the edge!

The levels themselves are basically dungeons. There are pits filled with spikes, enemies to fight, and levels to push! What really surprised me was how many secrets there were, which really encouraged exploration. What really surprised me was how damn hard the game is! It took me close to 2 hours just to get through the first stage! As I got further, the stages got a lot more complex and somewhat overwhelming. The stages also took on new colour palettes which made them more interesting.

In terms of graphics – its a bit of a mixed bag. The characters look extremely realistic for the SNES, and the animation is absolutely fantastic. The first couple levels also seem unique, but the further that you get in the game, the more similar each of the stages look, which was disappointing.  It would have been great to have more unique environments apart from dungeons. In terms of music, the game does a decent job. The tracks have great bass lines and have Persian influence that helps set the scene for the quest. The sound effects on the other hand are absolutely terrible. Sword fights sound nothing like it, and there are few sound effects besides that.

Overall, this is a challenging puzzle platformer with decent music and great character animations. There is little variety in the environments of the game (i.e., you are always in a dungeon), but if you can master the controls and gameplay, the game can be very rewarding as there are many secrets to find. Overall, I give this game a 7/10.