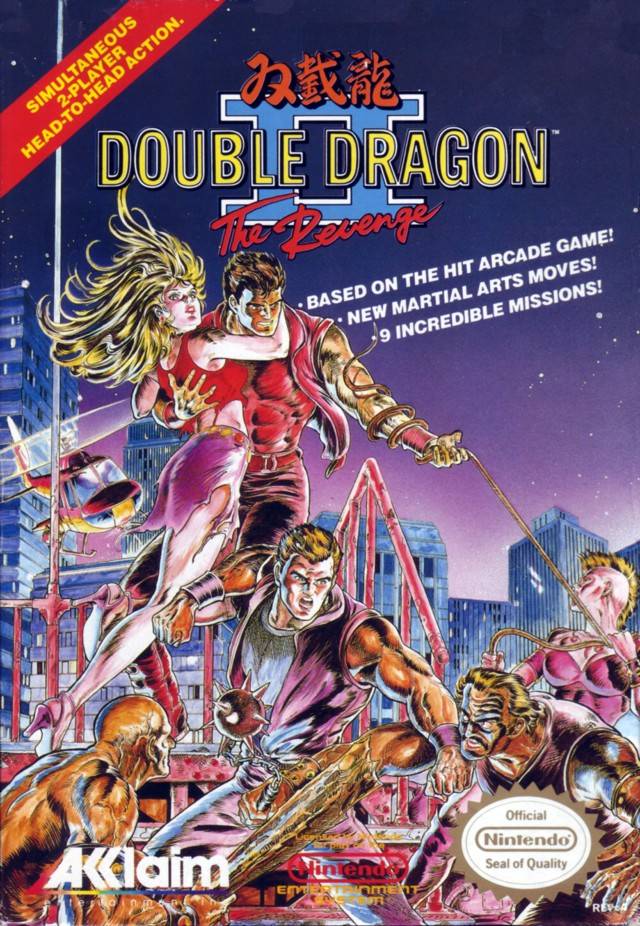 I never played Double Dragon 2 growing up. I played the original (which was only one-player and thus not a great game for my bro and I) and part 3 (which was way to hard – I couldn’t even get past the first level). The series left me quite dissatisfied as I personally didn’t like either of them that much. Enter Double Dragon 2, an awesome action beatem-up game that reaffirmed why I started collecting retro games, and one that raised the status of Double Dragon!

In terms of story, the game is gruesome right from the start and creates a great impetus for the quest! Marian – a girlfriend of Billy and Jimmy Lee (the main characters in the series) gets shot to death by the leader of the Black Warriors. It is your job as Billy and Jimmy to get revenge by finding and destroying the Black Warriors! The story is simple and concise – exactly what is needed for a action game!

In terms of gameplay, this game is primarily a beatem-up, but also has elements of platforming. You take control of either Jimmy or Billy, and guide them through levels, beating up wave after wave of bad guys and occasionally jumping over a pit. The fighting is awesome and satisfying, and the platforming is okay for most part although there are a few instances where the game demands precise jumping, and it just isn’t fun because the controls are a bit awkward for jumping. While the gameplay is fun alone, the game really steps up the fun factor when you get a buddy to play with you – this was a huge strength for me and now me and my bro can play together!

In terms of the controls, you move around with the direction pad, and punch and kick with the A and B buttons. Interestingly, the B button always attacks towards the left, and the A button always attacks towards the right, but the attacks vary depending on the direction you are facing. You always punch in the direction you are facing and kick in the opposite direction. There are a couple of simple techniques like uppercuts, flying kicks, and hurricane kicks that can also be initiated which spice up combat, and you can also jump with the A and B buttons being pressed simultanesouly. This was the only complaint I had with the controls – its too hard to jump, and its not precise enough given what the game demands of its players.

There are 8 levels total – some longer than others. While all levels have beaten-up components, every level or two they introduce some platforming elements that spice up the game, or keep the players on a strict 2D plane which significantly increases the difficulty (you cant run up or down to get away – see below for examples)!  The level where you are locked inside a helicopter is particularly memorable as the door keeps on opening, sucking you (and your enemies) out of the helicopter if you aren’t careful! If you were smart, you could knock the heavy enemies out for an easy win! Each level also has a boss (or bosses) that must be defeated before you can progress. They start off easy enough, and do a good job of introducing some challenge. Each one has a distinct look and pattern, but overall they are all quite forgettable.

The graphics (both environments and characters) are actually a bit bland and generic-looking, but there is lots of variety and the use of bright colours helps the environments “pop.” The levels take place in city streets, building tops, helicopters, and even an area by the ocean! The character animations are probably the best part of the graphics – as they do a good job capturing martial arts moves – and my favourite – the cartwheeling tough guys! I also didn’t notice too much slowdown either which helped keep the action moving. The music is above average and does a good job of keeping the action moving, although no tracks are really that memorable.

In summary, this is a great 2D beaten-up that is moderately challenging, incorporates a great multiplayer function, and has numerous platforming sections (some better than others) that makes it stand out among the many beaten-ups on the NES. Off all the Double Dragon games – this is my favourite! It is reasonably priced these days, so if you haven’t already picked it up, I recommend it! I give this game a final score of 8/10!

One thought on “NES Review – Double Dragon 2: The Revenge”