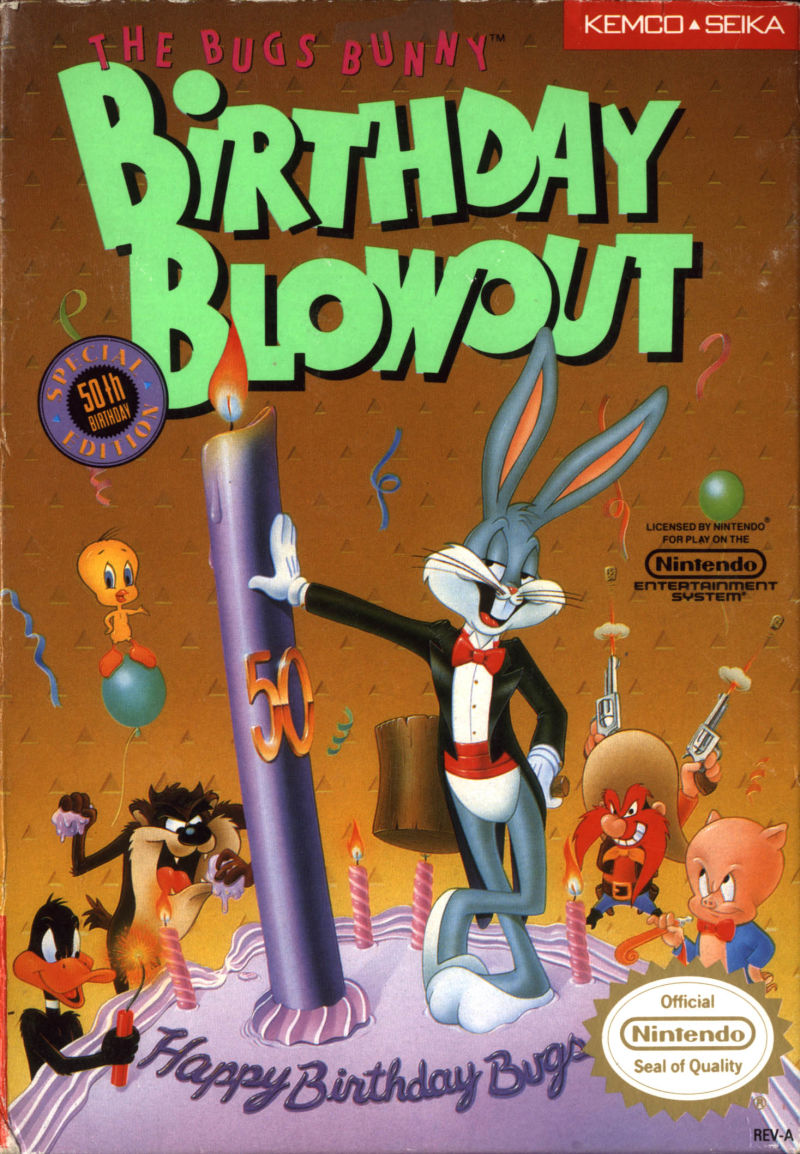 Bugs Bunny Birthday Blowout was a game I first played at my friend Blair’s house when I was six or seven.We traded games for a while and my bro and I had an opportunity to really give it a play. We never beat it, but got fairly far. I remember having a good time with the game, but have a particularly difficult time on one of the last worlds. Today I thought I would give this game a replay!

In terms of story, its simple and to the point (as seen below in the story screens from the game)! You play as Bugs Bunny, and you have been invited to Bugs Bunny’s 50th anniversary party! Not all of his pals are happy though because they have never had a big party thrown for them, so Bugs must someone make it through all the levels avoiding all his “friends” so as to make it to his birthday party in one piece! The story is fine and sets up the backdrop for the adventure.

This is a 2D platformer, and more closely a Mario clone! You take control of Bugs and run and jump your way through levels battling ACME enemies and your old friends! Platforming is a large component of the game, as is diving into rabid holes (i.e., Mario tubes)  to find hidden areas and secret passages through levels. Throughout  the levels, carrots (i.e., coins) are scattered which can be collected for bonus games at the end of each stage. To dispatch enemies, you utilize your trusty hammer to smash them to smithereens. In terms of controls, they felt quite loose which can be problematic in a platforming game, and the hit detection with the hammer felt off which was frustrating.

While it felt like a Mario clone, I did like how vertical many of the levels were, where you had to make a bunch of jumps in order to climb to the top of an area to proceed. The only downside was that the controls were not great, so I often found myself having to repeat areas because of how often I missed jumps.

The stages all felt pretty generic, but each group of levels had a fairly consistent aesthetic like “grassy area” or “desert area.” What really turned me off was how few of the enemies really felt like Bugs Bunny enemies. There was a green ball snake thing often bouncing around areas that just didn’t seem to fit with the rest of the game and really pulled me out of the game. At the end of each level, you have to battle one of your familiar friends like Daffy Duck, Tweety Bird, Samity Sam, among others. While generally easy, these bosses really made the game feel like a Bugs Bunny game – why couldn’t more of the enemies look like these guys! Upon defeating the boss and collecting the giant carrot, bugs moves on a bonus game which allows him to collect some extra lives. These games (pictured below) were a mixed bag of chance games like the bingo game, and skill focused like the whack-a-mole game, but were a nice way to break up the monotony of the levels.

In terms of graphics, the game looks quite good while still, but as soon as Bugs starts moving the game has a really choppy feel that I found really irritating. The iconic characters all looked great in 2D, but the random ACME enemies look generic and uninteresting. The levels have a clean look to them but again are very generic looking. The music is quite horrible and is a short track that repeats ad infinitum. I was really disappointed with the sound effects too – or lack thereof. There isn’t even a sound for successfully dispatching enemies with the hammer which contributed to not being sure if I successfully destroyed an enemy or not. They could have spent more time working on the sound and music in this game.

In summary, this is a 2D Bugs Bunny game this is certainly playable but just not that fun because of lackluster controls, music, and sound that is pasted between generic level and enemy design. There are certainly much worse games out there, so give it a shot if you like Bugs Bunny! Overall, I give this game a final score of 6/10.