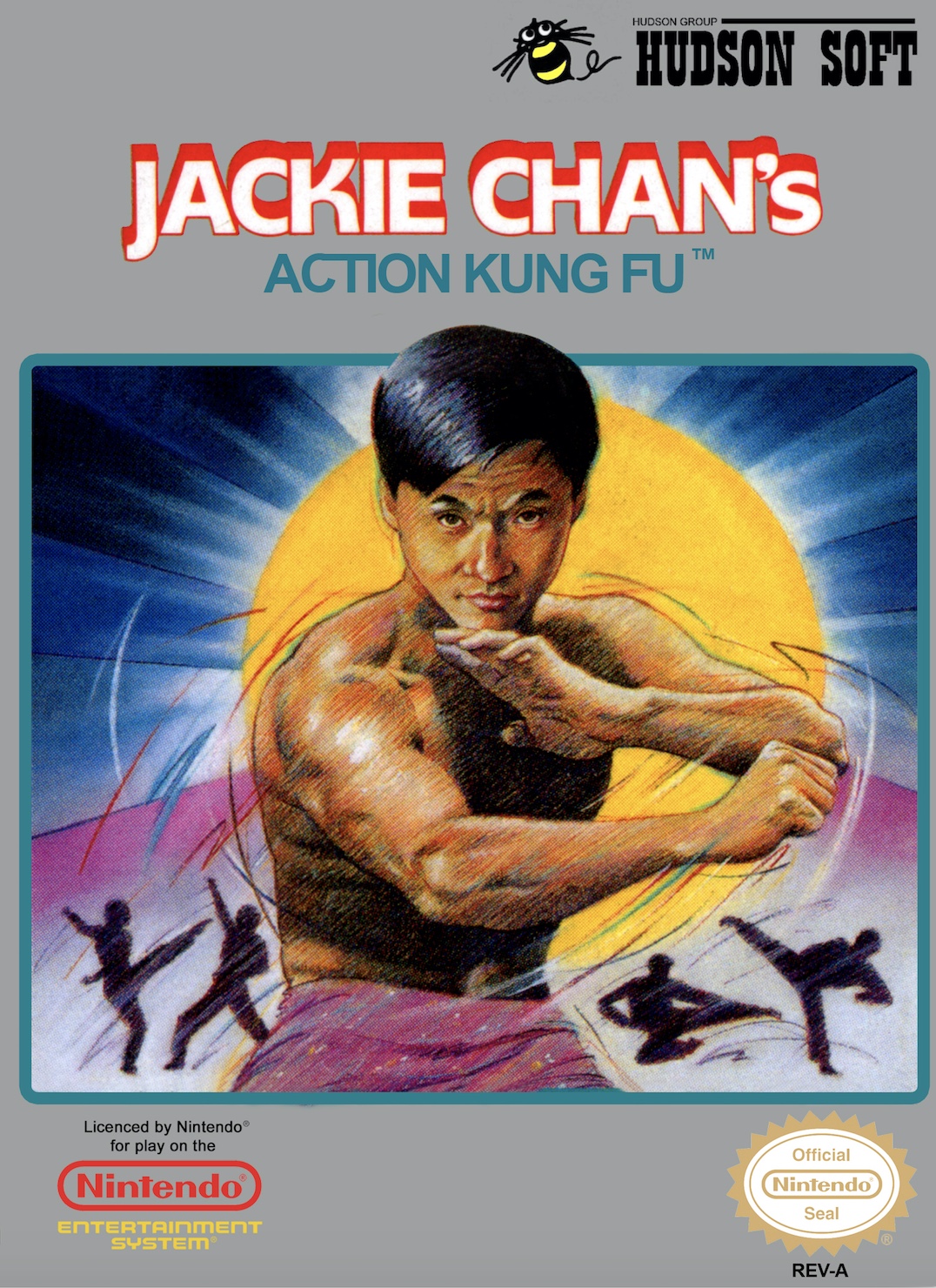 Jackie Chang’s Action Kung Fu was a game my brother and I rented when we were kids. When we rented it, we actually beat it over the weekend. As a seven-year old kid, there was a real sense of pride that we managed to beat it! I decided that I wasn’t playing enough NES games recently, so decided to revisit this classic!

In terms of the story – it seems to be pretty straight forward story. Jackie Chan is hanging out with his girl, an evil witch comes to break up the party, and Jackie Chan must go on an adventure to rescue her. It’s basically the story of Mario and Peach! And thats okay – it creates a reason for going on an adventure, and doesn’t get in the way!

In terms of gameplay, the game is an action platforming game. You control Jackie Chan, with one button jumping, and the other attacking. While you only have normal attacks initially (like jump kicks, trips, and punches), you can find items that give you temporary special moves like front flips, twist kicks, among others. The moves are limited use, but the drops are frequent so you generally always special moves to use. I liked the variety these moves offered and the strategy of when to use them, but would have preferred button combinations instead to elicit special attacks. You also have a energy ball attack that can be used up to five times – (think Dragon Ball Z). This attack was cool but made bosses a bit too easy.

In addition to the fighting mechanics, the game employs a lot of platforming elements. I found this aspect much more forgiving than most platform games because there were very few instant death scenarios. One level had me scaling a tower into the sky, and when I accidentally missed a jump, I fell multiple screens down to where I previously was, but didn’t die or loose any health! In addition, there aren’t any lives in this game – once you die, you have a game over! I was a bit concerned initially, but after learning how to play, and discovering that you can find more continues, the game became much more manageable.

In terms of levels, there were five in total and each was broken up into numerous sections emphasizing  different aspects of gameplay. For instance, in the lava cavern level,  the first section focused on lateral platforming and combat, whereas the second section focused on horizontal platforming with scrolling screens. This variety really added a lot of variety to the game and make each level feel well thought-out and enjoyable. In addition, the levels also had many secret areas that held helpful items like continues and orbs (to power you energy ball attacks)!

At the end of each stage, there is a boss battle (see pictures below). These bosses were large but often easy to defeat once their pattern was learned. As mentioned above, I used the energy ball attacks to great effect during these battles which made a few of the battles much easier. I appreciated the battles overall, but felt they were a little bit generic.

In terms of graphics, the game looks absolutely stunning for an NES game. The sprites were large and detailed, the levels were expansive and colourful, and the bosses were often half the size of the screen! The game takes players to a number of different environments ranging from lava caverns, river and forest areas, and even the clouds! These areas all had distinct looks which was quite impressive. There was also very little slowdown which was impressive considering how good the game looked.  In terms of music, the soundtrack was fairly generic but manage to capture a Chinese aesthetic. The sound effects were also quite average but got the job done.

In summary, Jackie Chan’s Action Kung Fu is an average but easy action/platform game with excellent graphics. The variety of different the gameplay was great, but it’s short length was a little bit disappointing and can be completed within an hour. Overall I give this game a final score of 7/10!