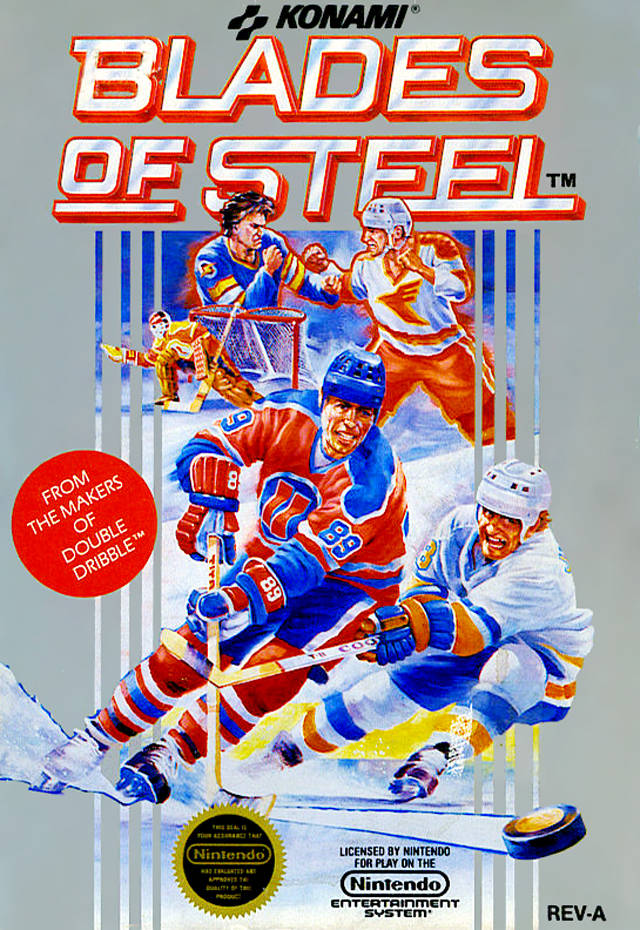 Blades of Steel! I got this game for Christmas when I got my original Nintendo when I was six years old! My twin bro and I played the heck out of it. While I never really followed hockey that closely (and still don’t to this day), since Blades of Steel, I have enjoyed the odd video game hockey experience ever since! 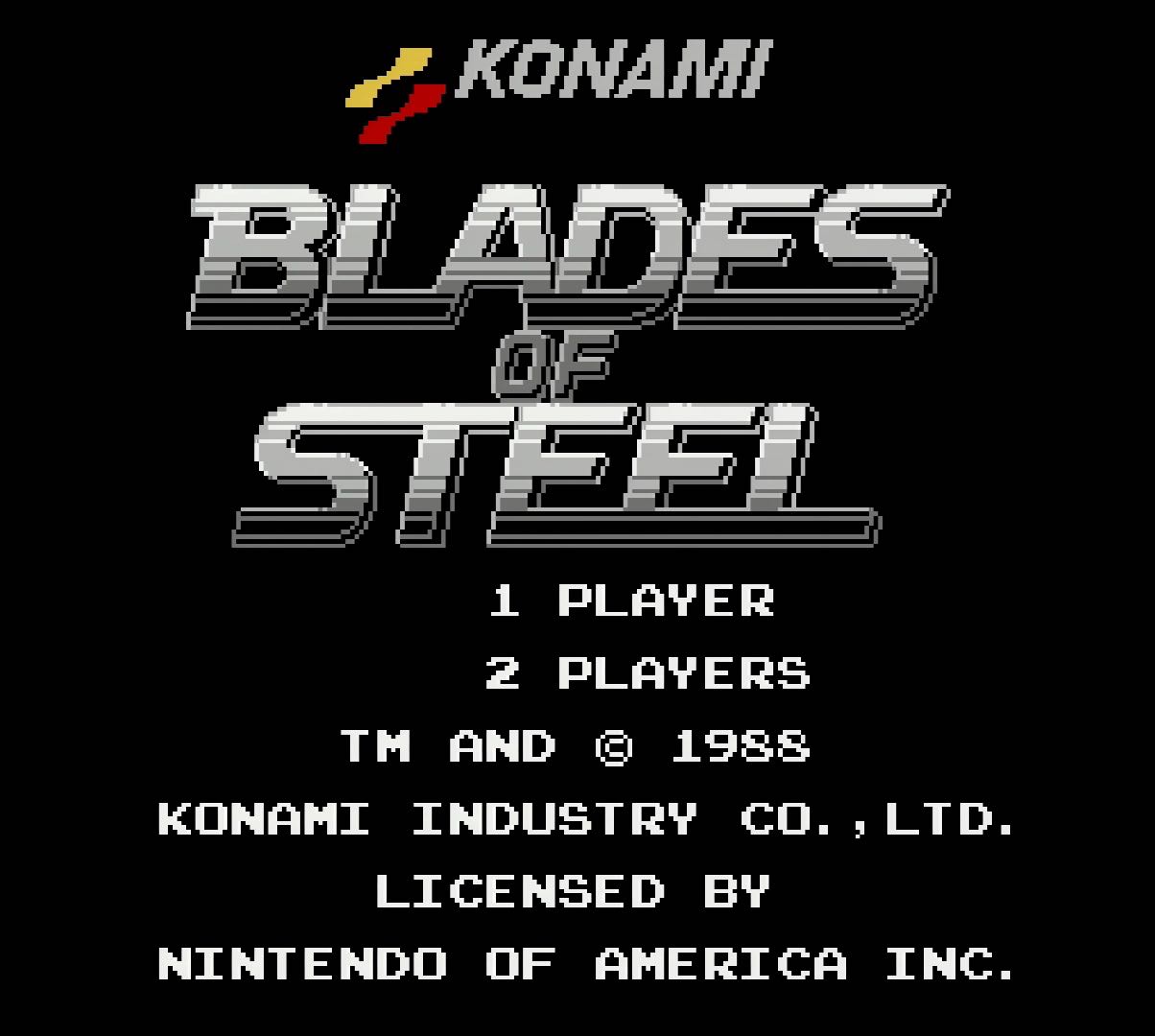 This is a hockey game – plain and simple. It is also not endorsed by the NHL as the teams are based just on the cities they are from with no associated logos. And that is perfectly fine with me! There are two game types: exhibition and tournament. I only played exhibition but suspect tournament is just that – it allows you to set up a round robin or sorts. There are eight teams available, many based on the cities of major NHL franchises like Toronto, Vancouver, and Montreal!

The gameplay is great in this game – and super simple! You have a lateral view of the ice (see below) and have one button used to shoot and the other to pass the puck. If you team doesn’t have the puck, a touch of a button will have you quickly take control of the player closest to the player with the puck. This is what I really like about old school sports games – they are super easy to control! The newer games are so advanced that its really hard to just pick up and play!

You check somebody you just run into them! Occasionally they will drop the puck and you can take it from there. If you bump into the players multiple times in quick succession, you can instigate a fight where it becomes a simplified 2D fighter where you can take face and gut shots and block incoming blows. Whoever wins gets to take possession of the puck! I am torn about this part of the game. Firstly, I think its really creative and quite fun initially (especially in 2-player mode), but my problem lies with the fact that fights happen way to often and can really interrupt and prolong the game.

Of all the parts of this game, the one thing that really made this game stand out for me compared to all the other hockey games is that at half-time, you get to play a shooter on the big screen score board! And there there are a bunch of advertisements for some awesome Konami NES games. This is the only time I have been happy about advertisements in the games!

In terms of graphics, the game looks great and is the best looking hockey game on the system. The sound in this game is hilariously bad, but in a good way. The muffled voice “Blades of Steel,” at the start of the game is iconic, as is “makes the pass,” whenever a player passes the puck. Music is not always present, but it does make appearances at the start of games, at goals, and at the end – just like in real hockey games. 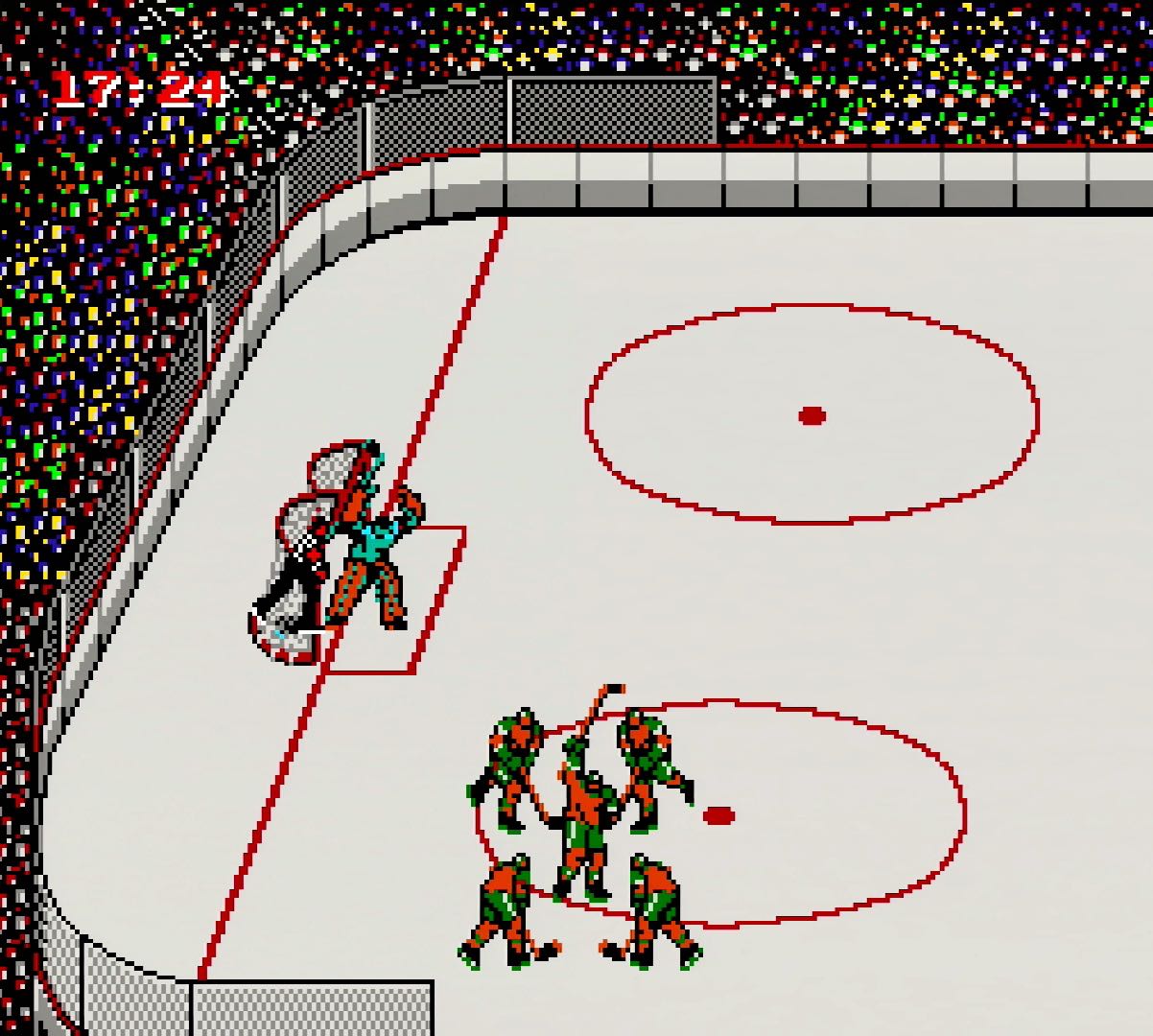 Overall, this is a great, simple hockey game with hilariously bad voiceovers. Its quick pick-up-and-play controls and mid-game shooter also makes this game stand out among the rest! The only thing that I found really interrupted the gameplay was the frequency of fights. Overall, I give this game a solid 7/10.

One thought on “NES Review – Blades of Steel”