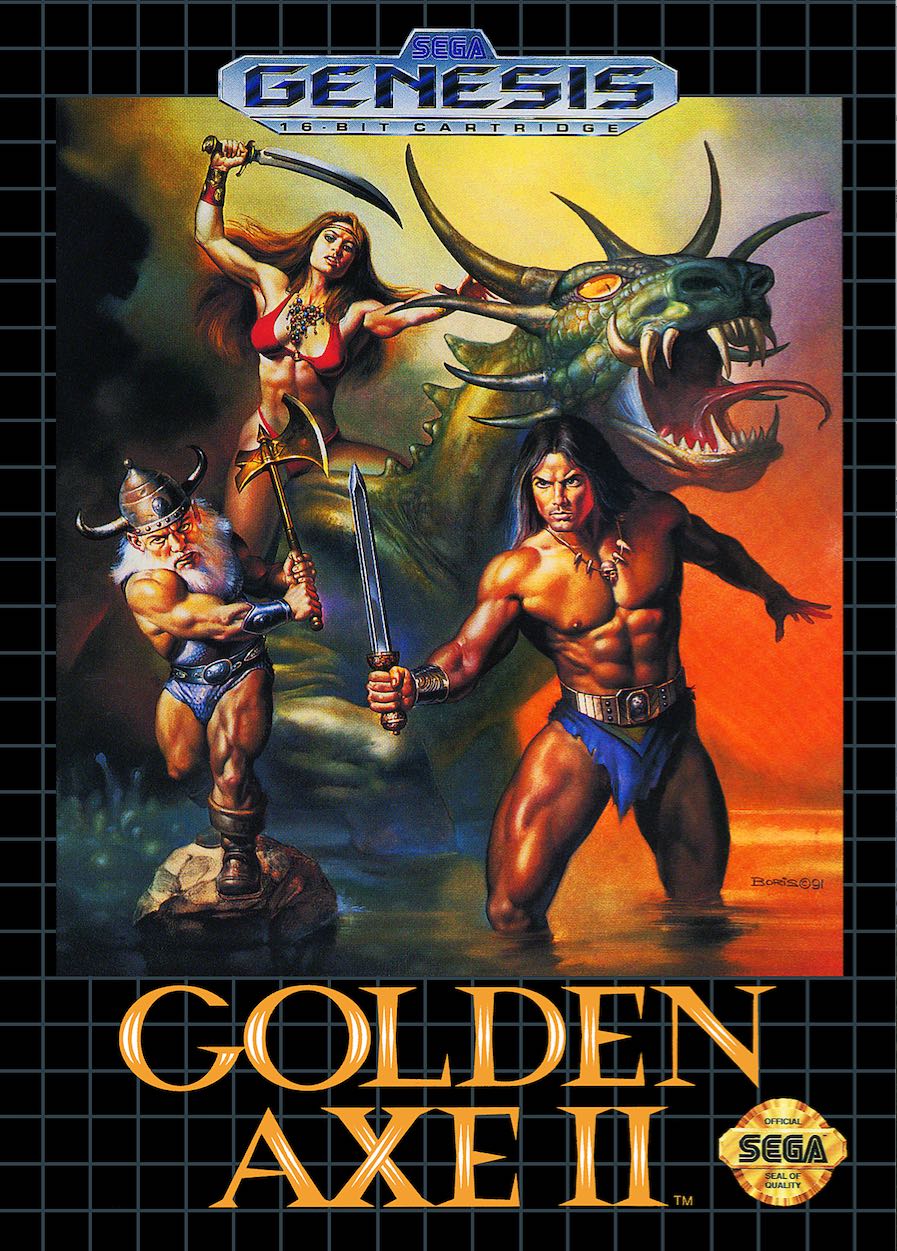 The Golden Axe series is synonymous with the Sega Genesis back in the 90’s. It was one of the blockbuster beatem’up series that brought the arcade experience into the home. While I liked the first one, I find that the second one really refined it on so many levels, improved the graphics, and has slight tweaks that just make it a better game! Strangely enough, Golden Axe 2 never made it into the arcades – it was a straight to home console release!

Similar to the first game, some evil jerk has got ahold of the Golden Axe and is threatening the land with destruction. Our heroes from the first game (Blue Underpants Man, Scantily Clad Woman, and Axe Dwarf) are back to save the land once again. This time around, the evil doer is the Lord of Darkness Dark Guld. Taking the quest on alone or with a friend, you charge through 6 regular stages and then battle Dark Guld in an epic finally!

In terms of gameplay, it is quite similar to the original. This is a beatem’up game plain and simple. You have a weapon and you bash the enemies in with it. There are a few changes made compared to the first one though – you can now pick up enemies and throw them in either direction. In addition, the circular attack (when pressing jump and attack) is now much more effective which is helpful when you get attacked from both sides. Mounts are still in the game too, and are as cool as ever with fire breath and back kicks!

There has been some adjustments to the magic system as well! In the prior game, when you used magic, you would use the whole entire bar of magic, leaving nothing for later. In this game, you can press the magic button once to use one unit of magic, or hold it down to use more units. The more units used, the stronger the attack. I really liked this addition as it would allow you to knock all enemies down when surrounded but leave some for the boss at the end of the level.

The level design is different as well. This time around, I found the levels much shorter, with more emphasis on the boss battles. I really liked this as it was less repetitious, and the bosses themselves where quite varied. They were more like challenging encounters than straight up bosses as sometimes you would fight a bunch of lizards, while other times one or two giant sword men. 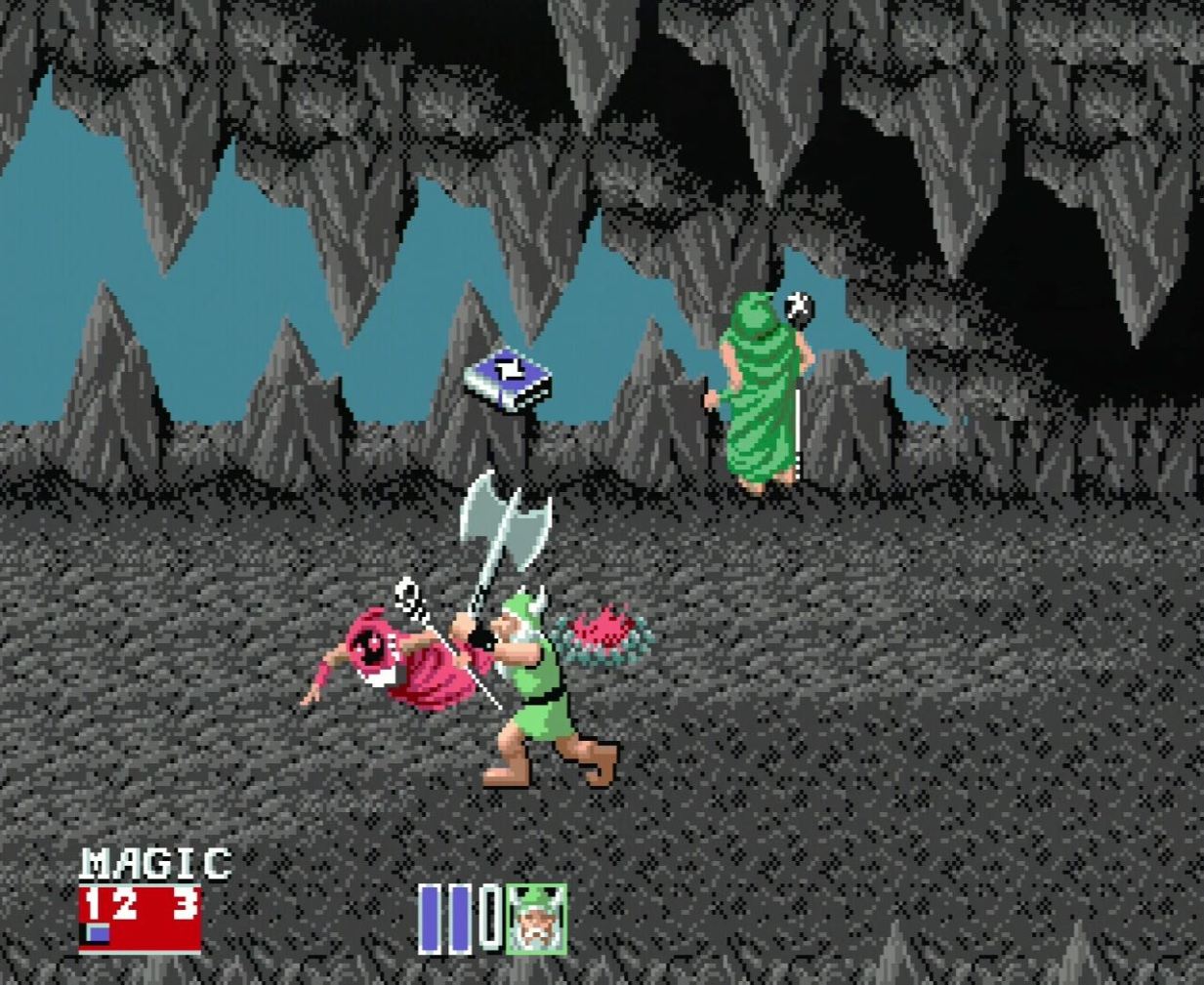 Those annoying wizards are back too, both throughout the levels and at the end – but are actually more plentiful than ever! This means your magic meter will be nice and full (especially if you play as the dwarf as he has the smallest magic meter). And yes – it is just as satisfying bashing them in in this game as it is in the last one.

In terms of graphics, the game looks quite a bit better. The characters are more detailed, the environments looks better, and the spell effects look a lot cooler! In terms of sound, it about on-par with the other one. The intro theme is probably the best in the game, but none of the music is really memorable, but it gets the job done properly!

In terms of difficulty, its challenging and enemies will try and flank you on both sides, but its not unbeatable. When I played the game for my review, I increased the life bar to five in the menu and made it all the way to Dark Guld. The epic battle did not go in my favour though and he ended up kicking my butt (as seen below).

Overall, this is an excellent beatem’up that makes some refinements to the original that just make it a better game. Graphics are great, its challenging but not impossible, and is always more fun with a friend! In the end, I give this game an 8/10.